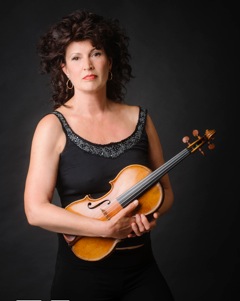 Sylvia Houtzager was born and raised in Delft, The Netherlands. Her musicality and the annual New Year's Concert broadcasted on television made her deliberately chose the violin as an instrument. As the daughter of an oboist and a musical mother she attended rehearsals and concerts from an early age. At the age of 6 she received her first violin lessons.

She attended high school that was affiliated with the Rotterdam Conservatory, where she chose the harp as a second instrument. During her studies at the Conservatory of Rotterdam and later in Amsterdam, she played in various orchestras and taught at music schools in The Hague and Delft.

70s
When the members of the group Flairck in October 1978 were looking for a special violinist, they bumped into Sylvia and the group rehearsed for two months at her home. In December 1978 she played her premier with Flairck in the Appel Theatre in The Hague. In January 1997, she made her television debut in the first television special of Flairck followed by television appearances in Belgium and Germany.
She received with Flairck the Silver Harp and two Edisons. Besides her work for Flairck she formed a string quartet that regular played studio work. She was asked for CD recordings and concerts by artists such as Herman van Veen, Don McLean, Georges Moustaki, Gavin Friday and the Irish singer Mary Coughlan.

The 80's
In 1984 Flairck developed at the initiative of Erik Visser and Sylvia Houtzager the theatrical 'instrumental opera' Ball MasquÃ©', in which she played a leading role. The group made concert tours to Greece, among others, Australia, Indonesia, Singapore and Thailand.
In 1989 Houtzager received with Flairck the Golden Harp, the highest musical award in the Netherlands. In addition to the male musicians of the group she radiated an often humorous femininity: a nervous Minister of Culture tried to pin the Golden Harp on a tiny bodice worn by Sylvia.

90s
In the autumn of 1990 Flairck celebrated their twelve and a half year anniversary with an incorporated double live album 'Alive', which was recorded in the Netherlands, Germany and Japan. At the end of the 'Alive' tour Houtzager left the group. That same year, Sylvia Houtzager recorded her first solo classical album called 'Die Geige'. She became an often asked session musician and in different studio sessions she recorded all of the string parts, including strings parties for the U2 single 'Please'.

Theatre Acts
Sylvia also developed a number of theatrical acts for the entertainment circuit. She conceived the 'Balloon illusion' and her string ensemble 'String Lights', which makes insistently use of black light technology in combination with fluorescent bows and instruments.
The following years were marked for raising her two children, and she was the driving force behind the studio. When she was approached by Erik Fisher and Peter Weekers in 2013 to join Flairck again, she did not hesitate.

Since 2016 Sylvia Houtzager completely focuses on the violin lessons she gives to newcomers and young talent. As soon as a student can firmly hold the violin and touch the strings she drags them out to play for audiences. A shopping center or retirement home are frequently visited places. Learning to love music is essential. Her teaching is to the youth 'a way of living'.